Written and directed by Robert Jury 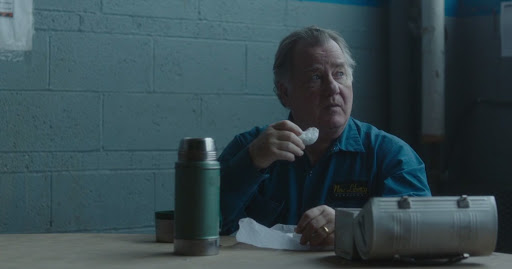 It’s always a thrill to see a great character actor land a lead role and make the most of it. Peter Gerety is one of those reliable stalwarts that cinephiles and casual moviegoers recognize, but probably struggle to name. Small but memorable parts in works like The Wire, A Most Violent Year, and Charlie Wilson’s War prove that a good character actor elevates the stars of a film while offering something memorable with brief screentime.

Gerety gets a welcome lead role in Working Man and his performance is one of a truly seasoned character actor. His heartfelt and downplayed turn as Allery Parkes creates an authentic and lived in character, but one who doesn’t overwhelm the cast, nor the social significance of the everyday working class Americans he embodies. Gerety plays a veteran working the assembly line of the ironically named New Liberty plastics factory in America’s Rust Belt. Allery is past his due for retirement, but salt of the earth working man that he is, he draws his identity from his job. To leave is to give up all that gives him purpose and direction in his golden years.

However, when the factory closes rather abruptly, workers like Allery are left desolate and without options. The situation in Working Man is like that of many factory towns in working class American. For Allery, though, his crisis is an existential one. He solves it by packing his lunch and returning to work regardless of the factory’s operation.

This debut feature from writer/director Robert Jury has the subdued minimalism of festival fare, and its quiet tenor and tinkly piano music somewhat dips towards sentimentality. However, the film’s sincerity is hard to resist as Gerety quietly brings the character to life with a performance that barely utters a word in the film’s first fifteen minutes. Allery’s quest to instill purpose in his life inspires his former colleagues from the factory floor, especially Walter (Billy Brown), and they join him in returning to work. The collective harnesses something of an Occupy spirit as their actions draw the attention of the news and the frustration of the factory owners, all of whom assume that Allery is the one mobilizing the troops. Their occupation of the factory, idealistic as it is, has an underdog spirit that befits the film’s own modest composure.

Jury’s slice of life tale offers a flipside of the working class life explored in this year’s Oscar-winner for Best Documentary, American Factory, which observed how factory towns like Allery’s stomping grounds endure with the downturn in American manufacturing. Where the residents of Dayton, Ohio found their fortunes changed for better and for worse by the interests of Chinese enterprise, the workers of Allery’s cohort struggle to find meaning when their white collar counterparts sees their efforts as disposable. They're faced with fear, uncertainty, and hardship at a point in their lives when they should be focused on peace and security after decades of hard and honest work. Allery and his wife Iola (Talia Shire) could easily be any of the Dayton residents handpicked to inspire a drama of working class struggles. Working Man is not an especially optimistic portrait of contemporary America, but thanks to Gerety, it reflects a reality that characters like Allery know all too well.